I’ve finally found it!  Seriously, I think maybe I’ve tried 50 recipes for grain-free waffles (or pancakes) and they all suck.  One time, I tried out a new recipe when my mother-in-law was in town.  Poor thing.  They were so bad.  She of course, graciously ate them anyways, but man.  Some recipes are just bad.  Untilllllllll, these.  They taste so good, the texture is identical to their traditional counterpart, and there is literally zero added sugar.  The ingredients might surprise you a little bit, but give em a shot.  I promise they won’t disappoint. My kids have not enjoyed any of my Paleo waffle attempts until this one – they both gobbled them up! Also, they freeze beautifully, so double the batch and stick extras in freezer for a quick breakfast or on the go snack.  We just pop them in the toaster frozen, and in a couple of minutes they are ready to go. 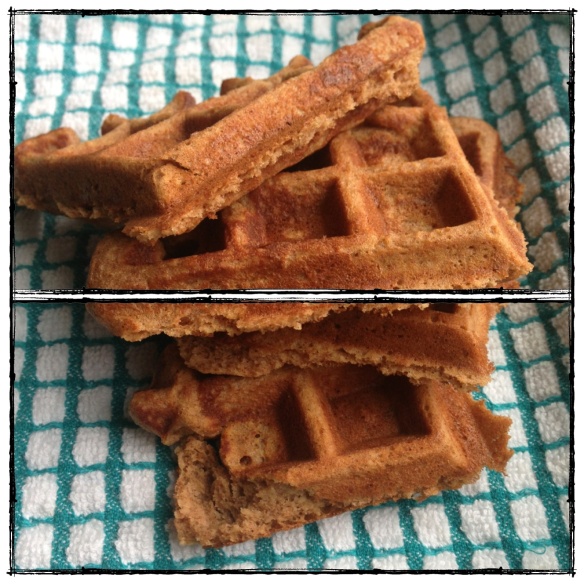 2.  With whisk attachment in place on electric mixer, whisk almond butter on high for 2-3 minutes until smooth and fluffy.

3.  Add apple/banana puree and the remaining ingredients to the bowl with the almond butter.  Whip on medium speed until fully combined.

4.  Grease hot waffle iron (do this in between each waffle to ensure they don’t stick to iron)

5.  Ladle batter into waffle iron until about 60% full, so as not to overfill the iron.  Cook approximately 4-5 minutes or until waffle is golden brown and crispy on the outside, and soft on the inside.  Enjoy!

NOTE:  Makes about 6 waffles, depending on the size of your waffle iron.

*Use organic ingredients whenever possible.